Mineral water from the Volcanic Eifel has a fanbase outside Germany: In 2014, Gerolsteiner was able to assert its position once again as a global market leader among carbonated mineral waters (source: Canadean). As Gerolsteiner Brunnen GmbH & Co. KG stated during the Anuga Food Fair in Cologne, the company has raised its total turnover of mineral water and mineral water-based refreshment drinks in Germany to 4.1 million hectolitres within the first seven months of 2015 (+3.6 compared to the previous year). The company's net sales total rose by 5.6% to €149.7 million (Nielsen, from July 2015). Gerolsteiner earns around 5% of its total turnover through exports. All signs point to further international growth as well. The company's presence at Anuga over several years has played a key role in raising its international business profile: "We mainly use the fairs to meet importers, maintain existing contacts and make new ones, and establish new markets," says Dietmar Spille, Gerolsteiner's International Director.

"International business is of strategic importance to us, as quality mineral water has a lot of global marketing potential. In particular, the Asian market, where uncarbonated water has been the dominant product for years, has proved to be very promising. We have found a niche with lots of potential in the market there with our carbonated mineral water, Gerolsteiner Sparkling," explains Axel Dahm, chairman of Gerolsteiner Brunnen's executive board. He adds that South Korea and Singapore were the main growth engines within the Asian market last year. Canada and North America have also contributed to Gerolsteiner's excellent overall export performance. Gerolsteiner's main areas for export have traditionally been the Benelux countries, Japan, and the USA.

'Water at its best': international marketing focuses on quality

The quality and high natural mineral content of Gerolsteiner Sparkling Mineral Water are at the centre of Gerolsteiner's international marketing activities. For example, the German slogan 'Das Wasser mit Stern' ('Water with a star') was changed to 'Water at its best' for the US market. Under the headline 'Mineralize Your Life', American consumers will discover how Gerolsteiner's mineral water can help fulfil their daily calcium and magnesium requirements. In addition to an American website and Facebook presence, there is also an international version of the internet portal www.mineralienrechner.de. At www.mineral-calculator.com, visitors can compare the mineral content of several international water brands to Gerolsteiner's own mineral content. Gerolsteiner will be extending its USA business campaign in 2016 and will be making use of several marketing tools including social media, promotions, and a targeted distribution campaign. The company will also be seeking to build on its overwhelming success in Canada during the previous year through intensive sales and marketing activities. 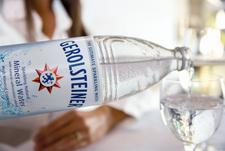